Ellen is a 75-year-old patient with confirmed myelofibrosis (MF). She is fit and active, with a performance score (PS) of 1. She has constitutional symptoms, splenomegaly, and normal platelet count at baseline. She started treatment with ruxolitinib 20 mg twice daily, which she initially tolerated well. However, after 3 months of therapy, she developed rising splenomegaly and a return of constitutional symptoms.

Discussion:
The Role of Fedratinib in the Emerging Treatment Landscape for MF

There are a few reasonable treatment options for Ellen at this point. These include switching to fedratinib, adding danazol or an immunomodulatory drug; switching to tagraxofusp; or referring her for a clinical trial.

In the current era, the use of the newer JAK inhibitors such as fedratinib is an appropriate next step for patients like Ellen who exhibit lack of response to ruxolitinib. JAKARTA-2 was a single-arm, open-label, phase 2 trial that was designed to evaluate fedratinib in patients with intermediate-2 or high-risk primary or secondary MF in patients with resistance or intolerance to ruxolitinib after at least 14 days of treatment.1 In this trial, fedratinib was given at a dose of 400 mg daily for 6 consecutive 28-day cycles. The primary endpoint was spleen response (≥35% reduction in spleen volume as determined by CT and MRI), and was achieved by 46 (55%) of the 83 assessable patients in the original per protocol analysis, using the last observation carried forward (LOCF) method. The most common grade 3-4 adverse events (AEs) were anemia and thrombocytopenia, with no reports of encephalopathy such as were observed in the JAKARTA trial.

Recently, a re-analysis of JAKARTA-2 was conducted with more stringent definitions of ruxolitinib resistance and intolerance.2 Of the 97 enrolled patients, 79 met the new criteria for ruxolitinib resistance (n=65; relapsed: n=18; refractory: n=47) and intolerance (n=14). Rates of ≥35% SVR were 28%, 31%, and 29% in patients who had disease that was relapsed, refractory, or intolerant to ruxolitinib, respectively, for an overall ≥35% standard variable rate (SVR) rate of 30%. Toxicities were consistent with prior reports, with no new safety signals identified. Other recently presented data indicate that fedratinib elicited robust spleen response rates regardless of the reason for ruxolitinib discontinuation.3,4 Furthermore, an analysis of health-related quality of life benefit showed that fedratinib provided clinically meaningful improvement across patient subgroups.5,6

Robert is a 70-year-old man who was diagnosed 5 years ago. He has a 4.5-year treatment history of ruxolitinib, which successfully managed his constitutional symptoms and splenomegaly. However, within the past 6 months, he experienced an intermittent return of several constitutional symptoms, specifically, fatigue and joint/bone pain. At his most recent clinic visit, he showed signs of increasing spleen size, which was now 8 cm below the costal margin and failing platelet counts, which were now at 55 x 109/L.

Discussion:
Beyond JAK Inhibitor-Based Therapy:
Novel Therapies Under Investigation in the Second-line Setting

In this scenario, appropriate next steps include switching Robert to fedratinib; stopping ruxolitinib for some time, then rechallenge; referral for a clinical trial of a novel agent; and adding danazol or low-dose thalidomide.

All of these treatment strategies are viable next steps for Robert, but if the patient is amenable to trying other therapeutic approaches, enrollment on a clinical trial of novel agents can be considered. There are many novel agents that are under investigation in the ruxolitinib relapsed/refractory setting, some of which are presented in Table 1.7 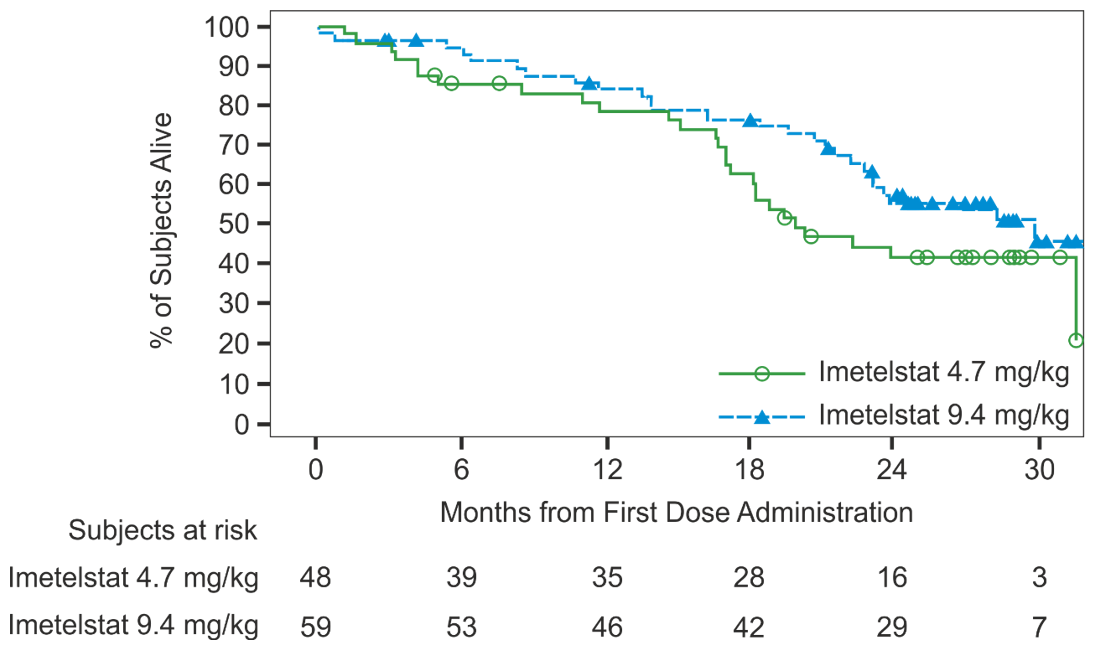 Susan is a 55-year-old woman who presents with 15% weight loss and splenomegaly 12 cm below the costal margin. She does not have a sibling donor. Further testing shows:

Biopsy results and mutational analyses confirm a diagnosis of primary myelofibrosis (PMF). She is started on ruxolitinib 20 mg BID, and after 6 months, the spleen has improved but remains 3 cm below the costal margin. She also is experiencing intermittent constitutional symptoms.

At this point, some treatment options can include adding hydroxyurea or pegylated interferon alfa, switching to fedratinib; or referral to a clinical trial of a novel agent added to ruxolitinib.

For patients like Susan who have a suboptimal response to ruxolitinib, enrollment on a clinical trial evaluating “add-on” therapy to ruxolitinib would be appropriate. There are many such trials underway, as presented in Table 2.

It is important to note that although the definition of suboptimal response varies across trials, one reasonable definition is as follows12:

Anemia
Patients with MF- and/or ruxolitinib-associated anemia can derive benefit from the addition of danazol, erythropoietin or its analogs, or low-dose thalidomide to ruxolitinib. There are also several promising investigational agents such as sotatercept13 and luspatercept,14 are being studied in combination with ruxolitinib; The investigational JAK1/2 inhibitor momelotinib also can be considered in this setting.

Progression of spleen and/or symptoms on ruxolitinib
Patients who develop progression of the spleen and/or symptoms while on ruxolitinib therapy can be switched to another JAK inhibitor such as fedratinib, or an investigational JAK inhibitor (such as momelotinib) or a non JAK inhibitor agent. Other treatment approaches that can be considered include enrollment on clinical trials investigating “add-on” to ruxolitinib therapy (as described above), or allogeneic stem cell transplantation (SCT) if appropriate, which should ideally be performed before progression.

Progression to accelerated or blast phase
There has been very little progress in this area and outcomes remain dismal, particularly for blast phase. Ruxolitinib may be continued, but has little efficacy as a single agent. Intensive chemotherapy followed by allogeneic SCT upon achievement of remission affords the best chance of long-term survival. Combination of ruxolitinib with a hypomethylating agent such as decitabine is also an appropriate choice and offers the advantages of outpatient administration and superior tolerability.